Students master addition and subtraction facts while having a great time. Written by the author of Sing, Spell, Read & Write, Sue Dickson, the program is multisensory with its math facts songs and videos, counting chips, and a reusable plastic write-on answer sheet in each student book. Students can easily master basic math skills beginning with counting.

Researched and designed to teach older students how to read, write, and spell using an age-appropriate curriculum that goes step by step to independent reading ability. Tests incorporated throughout curriculum. WINNING has a long track record of success and many testimonials from satisfied users.

Is a 90-day intervention reading program designed to enable students struggling with reading to become fluent and successful readers. Specifically designed to be a “different approach,” one that is fun for students. It uses songs and it uses games to reinforce the skills that we want the kids to have

We highly recommend taking a look at these “battle-tested” teaching tools; some of them may be a perfect fit for your modern classroom. 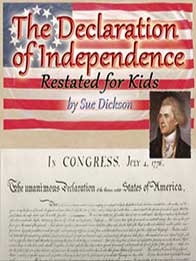 The Declaration of Independence

Teach your family and students about the U.S. DECLARATION OF INDEPENDENCE. Relive the inspired words of Thomas Jefferson and learn what they truly mean! 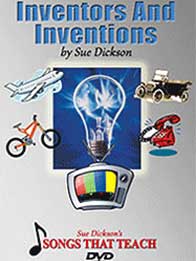 Sing along and learn the names of those who made such a big difference in our world! Songs includes inventors such as Edison and Ford and thirty major inventions that changed our lives. 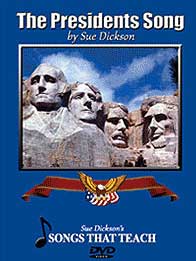 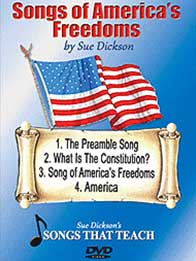 THE SONGS OF AMERICA’S FREEDOMS

Learn about the Freedoms guaranteed to all American citizens by the Constitution and the Bill of Rights. Perfect for elementary students, school assemblies, and those taking the exam for U.S. citizenship. 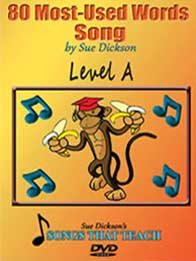 Help your beginning reader(s) master basic sight words by watching the video and singing along with “Marvin the Marvelous Monkey.”

" I have a CA teaching credential in elementary school and have taught in public and private schools. This is the BEST program that I have ever gone through. I am now homeschooling. I've used Hooked on Phonics, A-Beka, MCP "Plaid" Phonics, and this is an extraordinary program! My daughter is only a kindergartener. She went through the kindergarten program in six weeks. We're now at week 14! And, oh my goodness! We're just starting on the long vowel words, and Sing, Spell, Read & Write makes it SO easy! This stuff would just take so long, even in private school with the A-Beka program. I'm so glad that I chose it! I'm just absolutely thrilled, and I think every child should get the privilege of going through this program. Just had to let you know that, and if you could let the author know that or whoever can help promote this program! My daughter is just eating this up! I definitely made the right decision! Effortless!"

Sue Dickson is truly a master teacher whose learning programs are always organized, age-appropriate and extremely effective. Children love Sue's music. It is a composed and complicated enough so that the ear and mind are stimulated each time it's played.

Her Musical Math program goes beyond just a "musical math facts program" because her manual will enable you to teach your students the concepts that underlie these important math facts.

The songs Of America's Freedoms ought to be in every classroom in our country. It is chockfull of important information. Students barely know they’re learning with Sue's programs as they are SO well constructed that she actually takes teaching to the next level, fun! Whether you're a teacher or homeschooler, you'll enjoy these programs. Get them and Use them!

The instructor's manual calls Winning a "virtual teacher-proof" program, and it is absolutely right! If you can read, you can teach this program. The students mainly teach themselves, only needing occasional help with directions, plus the expected feedback on their work. It all adds up to the best teen-and-adult literacy program I've seen.

Ron Mann, Director/Deputy Director of The Commission on the Bicentennial of the United States during presidency of President Ronald Reagan, sent this note to Sue Dickson about her Song of America's Freedoms Curriculum and Play:

Sue, Thank you for sending the audio of your America's Constitutional Freedoms play. It is outstanding -You were inspired in your creation of it. Give the children and teachers my congratulations on a job well done! The enclosed U.S. Constitution booklets are for each of them.

Thank you! Thank you!! Thank you!!! I love the Presidents Song so much and was so happy to discover the download with the video!

Dear Sue, I thought you might be interested to know about our Musical Math Concert which took place at Parkview School last week. Every classroom in our school in grades 1 -4 is using Musical Math as part of their regular program and a senior kindergarten and grade 5 classroom are working together as MATH BUDDIES with your Musical Math Level 1 program. We had an audience of 250 proud parents and grandparents and a cast of 300! The press was there, and a photo even made the front page of the local paper.

Sue, I met you about 25 years ago when you and your associate shared your awesome reading program. On the night of your presentation, it was rainy and dreary. As I sat waiting to see, I saw how you and your associate began setting things up, all kinds of questions came to mind as to what kind of reading program this was. By the time it was over, I was totally hooked. I absorbed all that I could and through Operation Blessing I was able to obtain your kit. I am still teaching the songs and using the techniques I was taught by you. Thanks for helping me teach and reach the children who came into my classroom.

Musical Math is a great adjunct to your Math Curriculum. It helps with counting, number sense and all the facts in with age-appropriate rhyming songs. It engages all students easily because it's fun. This is a gem of a program and ought to be in every classroom as a great resource. I produced and directed an entire play with this Math program - whereby my students sang and danced all their facts for their peers. It was a great way to show off all that they know and have fun at the same time.

The WINNING program has helped improve my reading skills! I am now going back to enroll in college at age 41.

I retested some students last week, and in six weeks they have moved from the second-grade reading level to the fourth grade. The WINNING program captures their attention and motivates them.

This letter is to tell you how thrilled I am at the interest and progress in reading shown by my son as a direct result of the Sing, Spell, Read & Write Language Program. Rio's self-esteem and his interest in school and household activities have risen dramatically along with his new enjoyment of reading and spelling. I encourage you to make every effort to bring Sing, Spell, Read & Write to every child ...

Students achieve immediate and frequent academic success as they read meaningful stories containing the types of words just learned. Both story content and the various types of characters are appropriate for the age group and assist motivation.

Send Us a Message

Please complete the form & we will get back to you ASAP!